Posted by Richard on December 2, 2013
Posted in: Restoration. 1 comment

I’d rebuilt only one engine prior to this project.  It was a straight 6-cylinder for a 1958 Ford step-side pick-up.  The truck was purchased circa 1985 for my direct mail advertising venture, used for hauling mail to the main post office.  There was often so much mail that the front wheels were in danger of lifting off the road, which when added to the excessive steering wheel play made for hair-raising trips.  It also burned more oil than gas — I kept gallon milk jugs of used motor oil on board (free from service stations) to sate its daily appetite. 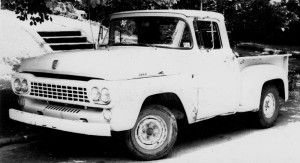 At the time, I lived on a rural six acre plot with 2 chicken houses, hog house, barn.  I extracted the engine with a come-along hooked to the rafters of a chicken house.  The rebuild was very basic and low tech. Didn’t re-bore the cylinders and the original pistons were re-used.  Only the rings, standard bearings, and gaskets were replaced.  Reassembled in the truck, I was shocked when it actually started and ran (didn’t expect it to).

The truck was rather ugly, but that was its distinction.  I named ‘him’  Stepside Clyde and we stuck together through many a woman.  Even though I had a new Jeep, the truck was fun to drive and I kept it for several years. 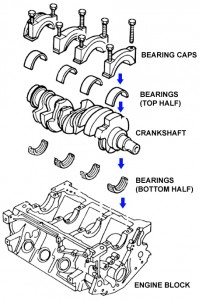 Exploded view of crankshaft-to-engine block assembly. Engine block is inverted, as it would appear mounted on its work stand (removed from the car). (Click to Enlarge)

As Jeff Foxworthy reminds us, if you’ve ever had to move an engine so your wife could take a bath, you might be a redneck. So, after swearing on a stack of Cosmopolitan magazines that reassembling the T-bird’s 390 was a clean endeavor that need not preclude feminine ablutions,  I received the blessing of  She Who Must Be Obeyed to bring the engine block onto our sun porch, all warm and dry.

After sliding the camshaft into position, the next step is to install the main and connecting rod bearings.  Each set of bearings should be measured for clearance (or gap) between the bearings and the crankshaft.  This clearance should be just enough to allow the crankshaft to rotate within a circular cushion of oil, without touching the bearings. (See cross section diagram below.) Too narrow a gap risks metal-to-metal contact, which can lead to 1) burnt bearings,  or 2) actually causing the bearings to be ‘spun’ out of their seats.  Too wide a gap risks a drop in the oil pressure needed to sustain the cushioning effect. 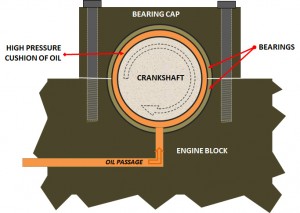 Cross section showing crankshaft rotating inside bearings on layer of oil. (Not to scale)(Click to Enlarge)

The easiest method for measuring bearing clearances is to use a thin string of wax called a Plastigage. After bearing halves have been installed in the engine, the crankshaft is positioned onto the bearings. A piece of Plastigage is placed on the crankshaft journal and then the matching bearing half (installed in its cap) is bolted on top and torqued to specification.  Now when the cap is removed the wax string will have been squashed flat.  Clearance is determined by measuring the width of the flattened Plastigage using the paper reference provided.   The wider the Plastigage is flattened, the narrower the gap. 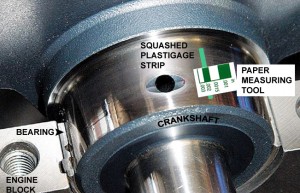 Flattened Plastigage strip after top bearing cap removed. The paper measuring tool is part of the Plastigage packaging.(Click to Enlarge)

These are the results of my main bearing measurements (in inches, front to back order).

The Ford manual specifies that clearances should be between .0005 and .0025 inches. However, even though a few of the above results are at or above tolerance, the expert consensus is that these clearances are acceptable, even preferred.  Also acceptable were the 8 connecting-rod bearing gaps, each measuring about .001 inches.  The next step is to have the crankshaft rebalanced, which will be the topic of the next post.