Posted by Richard on February 18, 2022
Posted in: Restoration. Leave a Comment

The Electronic Fuel Injection (EFI) system requires an oxygen (O2) sensor in the engine exhaust to regulate how much gas to inject into the cylinders. 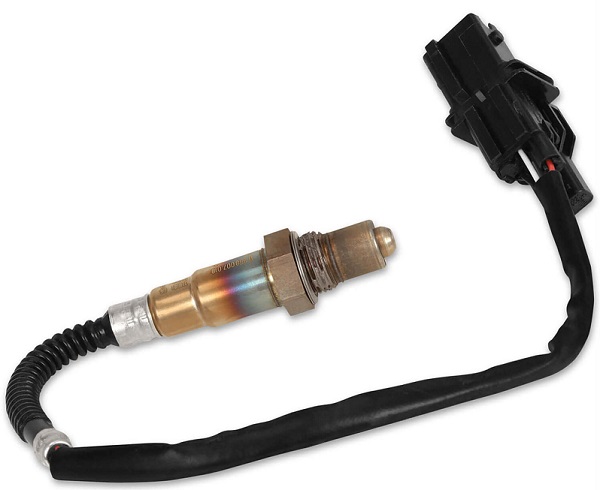 “The oxygen sensor is a critical component of the electronic engine management system, and relays real-time air fuel mixture data to the computer for minute adjustments to fuel mixture. When air and fuel enter into an engine’s cylinder and are ignited by the spark plug, the resulting exhaust gasses contain trace amounts of several elements such as nitrogen, oxygen, etc. The more complete the burn, the less oxygen is present in the exhaust gas. So, through interacting with the unburned oxygen in the exhaust, the sensor produces an electrical signal which the computer interprets as a rich, lean, or stoichiometric condition (the ideal 14.7:1 air-fuel ratio at which gasoline and air burn optimally). The EFI computer (ECU) can then take that information and use it to influence the amount of fuel it injects. This is called closed loop operation, where the O2 sensor actively influences the ECU’s fueling strategy.” (https://www.holley.com/blog/post/explained_holley_efi_sensors_and_what_they_do/)

The O2 Sensor must be inserted into the engine’s exhaust stream, which means drilling a hole in the exhaust pipe to insert the sensor, which is threaded into the hole. Unfortunately I misjudged the amount of clearance to the under-body when I drilled the first hole (red dot). I had to seal that hole and be more careful selecting a location for the sensor. The green dot is where it fits with room to spare under the car.

Once the sensor is installed and the pipes reconnected to the engine I can wire up the system, which I predict will be a much easier task.
Cheers,
Hiway Thunder