Posted by Richard on April 8, 2014
Posted in: Restoration. Leave a Comment 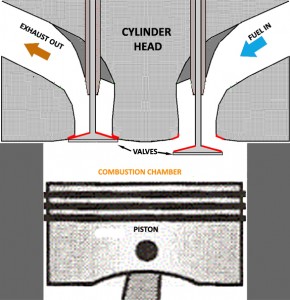 Cylinder heads are the gateways to and from the combustion chambers formed by the pistons in the cylinders.  As the crankshaft turns, cycling the pistons up and down in the cylinders, it also rotates the camshaft, which in turn synchronizes the opening and closing of the valves, 2 valves per combustion chamber. One valve opens the passage for fuel to enter the combustion chamber. The second valve opens to allow waste gasses (exhaust) to exit the chamber.  The valve seats(shown red in the diagram) are the areas where the valves contact the head to close the passage.

The valves cycle open-and-close in a “4-stroke” combustion sequence, as shown in this animation.

The cycle keeps repeating (until you turn off the engine).

The stock 1966 cylinder heads for the T-bird are made of iron. The valves are made of steel.  One of the reasons that tetraethyl lead was added to gasoline back then was that it lubricated the valve seats to keep them from wearing out too quickly.

Since leaded gas is no longer available, running the engine with the old heads would require that a lead-like additive be mixed with the unleaded gas at each fill-up.  (EPA probably doesn’t even allow that anymore.)   So, in order to run on unleaded gas the old heads must be retrofitted with valves made of stainless steel and the valve seats coated in a modern alloy such as stellite.  But since that’s expensive, for just a few dollars more (and less logistics) an even better solution is to just replace the heads with modern aluminum heads, which are designed to run on unleaded.  And there are other advantages to aluminum heads.

Aluminum heads assist in conducting excess heat away from the engine block, preventing runaway temperature increases beyond the capacity of the cooling system to handle, making it feasible to run the engine at a higher temperature.  Therefore, a thermostat set to operate at 195°F can be used.  The improved conductive efficiency of the aluminum heads transports heat away from the block allowing for the engine to be run at the higher temperature. The higher engine temperature increases the fuel aerosol pressure in the combustion chamber. The increased chamber pressure results in a more complete fuel burn.  This, in turn, creates: